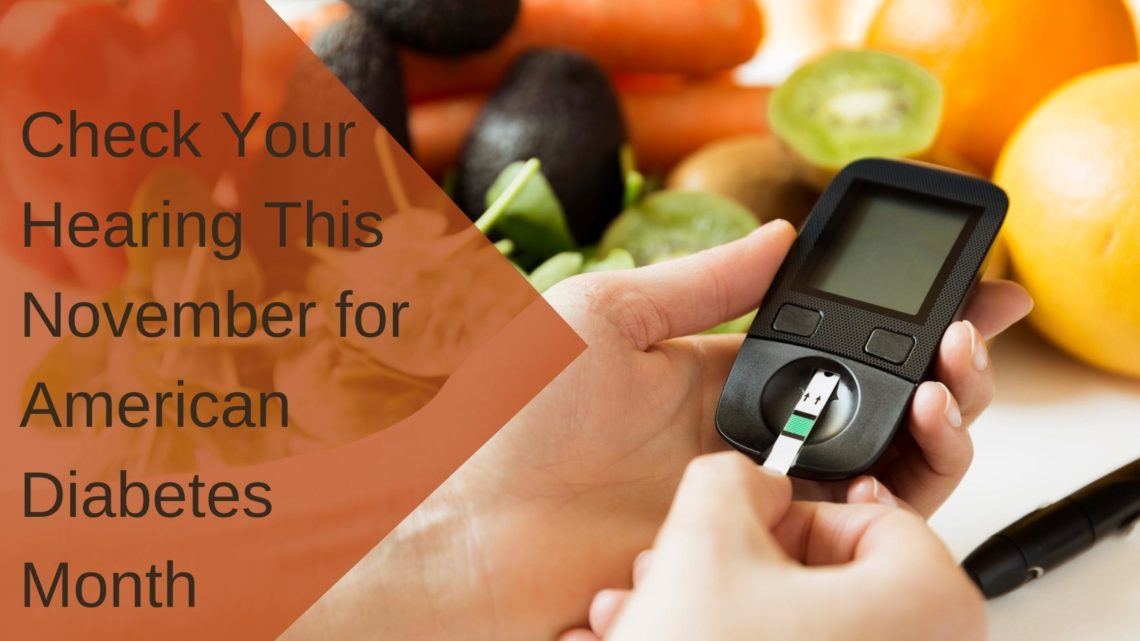 As we finish the last of our Halloween candy most of us look forward to cooler weather and food with friends in November. However, November also marks the start of American Diabetes Month — a whole month devoted to education and awareness around diabetes. Do you feel excessively thirsty or tired? Every now and then this is normal, but it is important to know that this could signal early signs of diabetes – also known as prediabetes.

The CDC estimates that 1 in 3 or 88 million people are at risk for prediabetes and 84% of them don’t even know it. The theme of this year’s campaign is screening and awareness of prediabetes. Detecting it early could prevent many disastrous symptoms of diabetes including heart disease, nerve damage, kidney disease, vision issue, and even amputation of limbs. Now researchers are finding substantial connections which suggest that diabetes also increases the risk of hearing loss.

While there are several types of diabetes, more than 90 percent of cases are considered type 2. Type 2 diabetes occurs when the pancreas doesn’t produce enough insulin or the body’s cells don’t react to insulin. Insulin is a hormone created by your pancreas, a gland located in the abdomen which releases enzyme which help to break down sugars, fats, and starches. It also creates a hormone called insulin which is constantly controlling the amount of glucose in your bloodstream. It also aids in the storage of glucose in your liver, fat, and muscles.

Type 2 diabetes occurs when the pancreas doesn’t produce enough insulin or the body’s cells do not properly absorb the insulin. Without sufficient levels of insulin, cells throughout the body are unable to rely on enough glucose to fuel different parts of the body. Extra glucose that is not used by the cells will be converted and stored as fat so it can be used to provide energy when glucose levels are too low. If left unregulated, improper levels of insulin throughout the body can lead to cell and damage across the body, including the heart, eyes, kidneys, and the ears.

It is commonly known that diabetes can lead to life threatening complications. In fact, having diabetes increases the risk of mortality by 50 percent. Therefore, it is no shock that diabetes also puts our hearing at risk, but how is the question. A 2013, meta-analysis explored the link between the two conditions. The study combined data from 13 studies on the topic and found that diabetics were 2.15 times more likely to be diagnosed with hearing loss than non-diabetics. Researchers speculate that this is likely due to diabetes effect on cells. Our hearing relies in part on our ears’ ability to send sound information to the brain. It achieves this using tiny hair cells which convert sound vibrations into electronic pulses, which the brain interprets as different sounds and speech. However, when these cells become damaged due to issues with the absorption of insulin, it can also cause permanent depletion of audio delivery to the brain. This can result in lasting permanent hearing loss.

While the effects of hearing loss are irreversible, audiologists frequently prescribe hearing aids and cochlear implants to amplify the existing sounds so you can still hear. Even so, it’s important to act this month and do what you can to protect your hearing. Monitoring your blood sugar levels could be the key to helping you detect a potential case of prediabetes. While diabetes can occur at any age, the risk rises significantly as you age.

After 45 years old it is recommended that you screen for diabetes at least every three years. In the meantime, make sure you get at least 30 minuets at least a couple of times a week of cardiovascular exercise and eat a diet rich in vegetables and lean meats while avoiding processed sugars. The more you can do to prevent blood sugar levels to rise to prediabetes or diabetic levels the safer you’re hearing, and your total health will be.

The sooner you address hearing loss, the sooner you can avoid communication issues and the mental and emotional effects which often accompany them. If you have been diagnosed with diabetes, it’s a good idea to have your hearing checked too. Schedule a hearing test today!