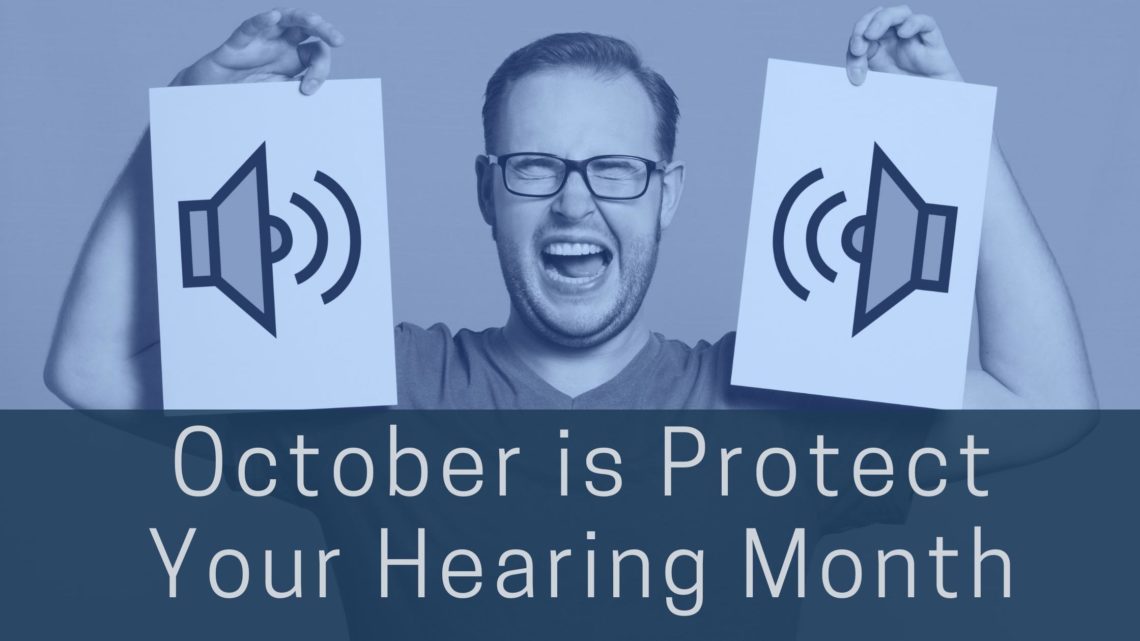 Many people think of hearing loss as a condition that affects seniors. While hearing loss affects one in three people over 65 and half of those 75, a younger generation is living with hearing loss. Noise exposure threatens to damage the hearing of younger people.

The Centers for Disease Control and Prevention (CDC) reports that about 40 million Americans ages 20 to 69 with hearing damage from everyday loud noise. This October is Protect Your Hearing Month, an annual campaign led by the National Institute on Deafness and Other Communication Disorders (NICDC) to raise awareness around how and when noise could be damaging your ears.

When and Where Is it Too Loud?

Noise is one of the most common causes of hearing damage. It is commonly understood that work is a place where your hearing could be damaged. This is particularly true of people who work in construction, manufacturing, or law enforcement, where industrial noise is present. However, you might be surprised to find that noise can reach the threshold of safety in many unsuspecting places.

Sounds are measured in decibels. On the decibel scale, the quietest audible sound (perceived near total silence) is 0dB. A sound 10 times more powerful is 10dB. A normal conversation averages around 60dB while a household appliance such as a dishwasher or washing machine may reach around 70dB. Any sound which surpasses 85dB can start to damage your hearing. It is not just the level of the decibels, but the length of exposure. 85dB can start to damage your hearing after about 8 hours of constant exposure. However, at 88dB, the same amount of damage will start to occur after only half the time. The proximity to the sound also affects how it is perceived. For every doubling of the distance from the noise source the sound pressure level decrease by 6 decibels: This means that when possible, you can reduce your noise exposure, simply by stepping away.

A Younger Generation Affected by Noise

It is not just older adults or even the middle-aged who are struggling with hearing loss. Evidence shows that among 12- to 19-year-olds, it is estimated that 17 percent display evidence of noise-induced hearing loss in one or both ears. The issue is that hearing loss is not only present in younger adults, but they don’t realize they are affected. When the CDC analyzed over 3,500 hearing tests, one out of four adults claimed their hearing was just fine and reported no job-related noise. However, hearing tests indicated the presence of noise-induced hearing loss (NIHL). The most defining feature of NIHL is the struggle to perceive sound in a high-pitched range.

About 22 million U.S. workers are currently exposed to hazardous occupational noise with 33 percent showing evidence of NIHL. However, there are many other unexpected causes of noise. Traffic can reach heights that are consistently high to impact your hearing. This means that for those of us who commute for over an hour, sound can build up. For instance, an approaching subway train, or proximity to a car horn can reach decibel levels of 100dB which can cause damage in just 15 minutes. “We have government standards in the workplace to protect workers from noise, but nothing protects you from a society getting noisier every year,” says audiologist Jack Scott, of the Center for Audiology, Speech, Language, and Learning at Northwestern University.

Perhaps one of the biggest threats to a younger generation is the normalization of personal listening devices. iPod, Smartphones, and mp3 players provide sound, right to our ears at dangerous decibel levels. A headphone can reach 100dB or even 110dB. At just 10 decibels over 100 sounds can damage the ears in only a minute. With the constant streaming capabilities of music, TV, and podcasts NIHL might be one of the biggest issues affecting Millennials and Gen Z.

Knowing when your hearing is at risk is key. Anytime you listen to your headphones, make sure to keep the volume below 60 percent of its potential volume and take listening breaks. Know the decibels in the places you frequent most and wear hearing protection whenever the decibels surpass 85. Most importantly, if you do suspect you have a hearing loss, don’t delay in setting up a hearing test. We can help you understand the extent of your hearing ability and find the best treatment for your hearing needs.